The Games of Christmas Past

The Games of Christmas Past remembers the best festive games of yesteryear, a simpler time before two year development cycles put paid to the seasonal blockbuster…

Ah Christmas. The lights, the presents, the tree, the presents, the carol singers, the presents. Oh those joyous presents. It’s a time to revel in all that you have and sneer at the have-nots. But despite the corrupting influence that capitalism and materialism has fostered in our cynical view of the holy holiday, there was a time before the magic had been cruelly shattered, when Christmas meant something different. It was a time for putting aside our narcissistic dreams of world domination and thinking of those less fortunate than ourselves. Special Delivery is a game that takes that ethos and puts you in the big red pants, depositing packages of happiness down the chimneys of the world.

This is a game that Estate Agents would call charming (poor graphics) and compact (not many levels) but it is also a fun and very tough challenge. But hey, who said being Santa was easy. Set over 3 distinct levels you must help the big guy deliver presents to the kids on the nice list through a side scrolling sleigh flight, Kong-like chimney descent and a burglar-esque mad dash through the houses.

But this is a game of the 80’s, so it is no surprise to learn that the National  Elf Service are striking again leaving Santa with a toy shortage. But fear not, the Angels are happy to break the picket line and are frantically making toys and dropping them from clouds for Santa to collect en-route. Of course you will need to watch out for the scab hating red elves that are dropping letter bombs disguised as presents to halt your progress*.

When enough presents have been collected you must then land your sleigh on the largest rooftop where the view then changes to inside the chimney. Here you have 3 parallel chimneys that must be navigated whilst avoiding the flames from the fire below. Make it into the house and you must then leg it through the rooms dropping your payload under the tree and escaping through the front door only to start again in another location.

It is a pity that we will probably never see the likes of these Christmas specials again because just as I never tire of watching It’s a Wonderful Life on Christmas Eve (with the volume turned up high so that I can ignore the carol singers knocking at the door), I will also never tire of Special Delivery’s gimmicky seasonal cash-in glory. Charming.

*back-story may not be exactly as per the cassette inlay.

Interesting Santa fact: Old white- beard suffers from a rare psychosis, triggered by caffeine, that manifests itself in dual personality schizophrenia. At least that’s what Funcom would have you believe (obviously explaining the ‘daze’ in the title). But we’ll come to that later. 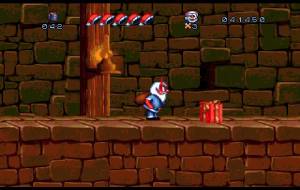 Daze is a rare seasonal game in that it isn’t a demo, cut down mini-game or blatant advert for some other game or product. It is a full sized, full quality, commercially released game from a semi-respected developer. It follows the tale of Saint Nick, who is dismayed to find that an evil snowman has imprisoned all Santa’s elves in ribboned gift boxes and is holding his reindeer captive.

Your task is to guide Santa through 24 levels (each amusingly illustrated by an advent calendar window), freeing your vertically challenged friends. The game is pretty much standard platform fare, but everything it does is wrapped in such lovely Christmassy jingles and bright colourful graphics that the moment you load it up you get a warm glow that doesn’t leave you until your adventure is over. The game is incredibly easy though, so one play a year will suffice, but I defy anyone not to be charmed by the sleigh ride across the rooftops of London ( and other major cities). 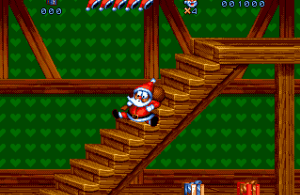 So with all this cuddly cartoon fun, what’s all the schizo stuff?  Well for reasons that I have been unable to fathom, if Santa collects a cup of coffee power up he immediately transforms in his alter ego ‘Anti Claus’. In his new horned and blue-suited form he loses all magical powers, but is able to whack the various enemies with his sack. This is so out of keeping with the rest of the game and is therefore only worth doing to hear the sinister music that plays whilst in his evil guise.

Strange it may be, but then it was made by Scandinavians so I suppose being closer to Lapland makes them a better judge of Santa’s eccentricities than I.

Back in the eighties it was great, we got a white Christmas every year, no repeats on the telly, wars would stop and no one would go hungry (OK, so none of those are strictly true, but that was how it felt back then). The joy of going through the TV and Radio Times with a big black marker, ringing all the shows that you wanted to watch, cracking open a new five pack of three hour videotapes to record Morecambe and Wise and the Two Ronnie’s.

But best of all, were the bumper double issue Christmas specials of your favourite computer magazines. I was a Crash man, but for one issue a year I would put aside the petty rivalry with my Your Sinclair loving enemies and buy both. Big double issues with a snowy scene on the cover and plenty of pictures of staffers in silly hats. But what made the magazines extra special were the tapes stuck to the cover. Gone were the limited demo’s of up and coming games, to be replaced with full commercial games or brand new specials and in 1987, Gremlin Graphics and Your Sinclair combined to produce one of the best Christmas cover tapes ever. 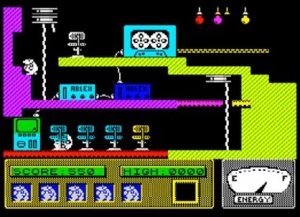 Moley Christmas is a six screen game in the Monty Mole series and after previously tackling such thorny subjects as the miner’s strike and the increasing influence of Europe on local politics, Monty’s next exploits were to centre around one of those unsung professions that work tirelessly over the Christmas period to keep the country on track. No not nurses, or policemen, or firemen. This game is about those hard working games journalists and has you running around the Your Sinclair offices in a bizarre time travel trek to find a disk containing the code for the free game that will adorn the cover of their Christmas issue. The disk needs to be taken to the tape mastering plant and then the tapes duplicated. Then a trip up the M1 back to the YS offices before the magazine hits the newsstand.

It is typical Monty platform fare and with only 6 screens it isn’t the most in-depth game ever, but Monty does what Monty does best and this was the perfect kind of game that will see you through Boxing Day while you waited for the shops to re-open so you could get some batteries for you Big Trak.

In winter of 1989, Anco had the genius idea of converting their generic (but very successful) Strip Poker games into a Christmas cash-cow and who better to front the game than Maria ‘metal-bikini’ Whittaker. Full of the joys of the season, those kind hearted chaps (I assume they were chaps) decided that as an extra special Christmas present they would not only reduce the number of girls from their own standard of two to the singular Ms Whittaker, they would also kindly let us pay an extra £5 for the privilege. 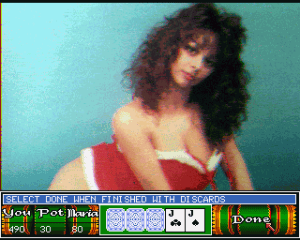 The game itself was solid enough and the sight of photo realistic pictures of Maria in her Santa’s little helper suit certainly raises MCB above its main competition Sam Fox Strip Poker on the 16-bits. But Anco in their ultimate wisdom also decided to release the game on the 8-bit home computers. The Commodore 64 version is passable with poorly coloured in digitised graphics, but the hand drawn version for the ZX Spectrum is one of the most disturbing games I have ever seen.

So if you have a hankering this yuletide for a little festive titillation why not fire up Maria’s box. Just make sure you choose the Amiga or ST version if you don’t want Christmas nightmares!

C64 (also on Spectrum and Amstrad)

As the new decade ushered in a new era of hope, Zeppelin thought they would get in on the Christmas game lark and a quick look at the wintry themed efforts that had gone before showed a gaping hole in one genre – the shoot ’em up.

Not the most festive of game types you may be thinking, but as soon as load the game up and the wonderfully jolly SID chip remix of Joy to the World blasts out, all of that is forgotten. Capers is infact one of the most Christmassy  games ever made and by the end of a few games you may well be on the verge of cancelling the fat one’s visit down the chimney and waiting for Easter!

Right from the off all the trimmings are literally thrown in your face. The elves you see are up to there tricks again (which seems to be a common theme in these games ) and they have kidnapped Santa and set all the toys against him. Luckily he managed to get a message to his chief helper (that would be you) and you must impersonate ol’ white beard and deliver the presents to the good folk of Britain. It is nice to hear that Santa is so biased towards our great land that he is happy for all other countries to miss out, just so we can get our Action Man and Mr Frosty.

The game is split into 2 distinct tasks, firstly you must fly the sleigh from the North Pole workshop to England (passing through Greenland on your way). Then as you fly above the English rooftops, you must deposit presents in chimneys ensuring that all the little kiddy-winkles on the nice list don’t have their faith in Christmas destroyed too early and spiral into substance abuse, petty crime and poverty.

As shmups go, the game stands up as a good fun budget title that is challenging enough to give you an hours fun, but not really challenging enough for any long term appeal. But that is the beauty of Christmas games, they don’t need the longevity of normal games. If we can get just an hours annual fix of tinsel adorned retro gaming goodness then we are more than happy to pack the games away like the baubles that they are and not give them another thought until next year.

We hope you have enjoyed our nostalgic look back at the festive games of yesteryear. If we have missed any of your favourite yuletide games or you have some anecdotes from your own Christmas past, then scroll down to the comments and let us know.

← T’is the Season
(to be disappointed)
Movie Review: Star Wars: The Rise of Skywalker →