Golf is a wonderful sport with a rich heritage, enjoyed the world over by young and old alike, therefore it only seems natural that throughout the past thirty-odd years programmers and games companies have attempted to replicate this most traditional of pastimes in digital form. Of course, nothing can truly compare to strutting about wearing loud trousers, in torrential rain, whilst searching for your balls in the rough. However, computer golf does have a few distinct advantages: it’s a lot easier than real golf, it costs a lot less and your not squawked at by the locals for taking seventeen shots on a par three. So, having concluded that computer golf is greater than real golf, let’s take a look at the development of this most dramatic of genres. 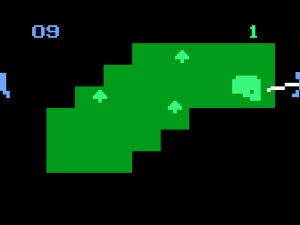 ‘An extremely realistic nine hole electronic golf course!’ enthuses the box to Computer Golf on the Odyssey 2, one of the first computer golf games available. Much like Golf on the Atari 2600 (released a year later), the game is viewed from a birds-eye perspective with no real consideration for scale or realism. The golfer, represented by a large blue giant, is easily controllable as you stride around the course lining up your shots. Once correctly positioned, taking a shot involves holding down the button, the longer you hold, the more powerful your shot. In order to hit south-westerly your golfer swings the club over his head in a strange chopping motion – very odd. However, despite being a somewhat simplistic representation of actual golf, the game is great fun and is actually quite addictive. Like a lot of early computer games, the ease of play and one more go factor are Computer Golf’s greatest assets. 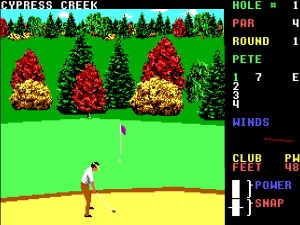 Although there were other golf games released in-between this and Computer Golf, Leaderboard by Access Software is rightly considered the first great golf game. In Leaderboard the play perspective is third person from behind the golfer; a style of presentation that the majority of golf games have subsequently adopted. In order to achieve this more dynamic and realistic viewpoint the computer literally needs to redraw the course for every new ball position – this only takes a matter of seconds, but it is kind of trippy. Shot control in Leaderboard is very simple and the game pioneered the famous two-click technique – push and hold button to start, when power gage is at desired amount, release button and then push again when gage has returned to ‘snap’ position. Revolutionary, simple and great fun to play – a spectacular hole in one that Zzap64 rightfully awarded a whopping 98%. 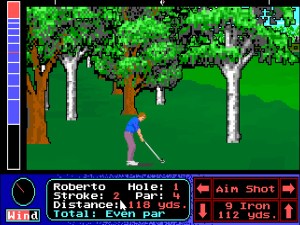 Jack Nicklaus is a golfing legend and as such it only seems proper that he should have his own series of games, the first of which appeared on store shelves back in ’88. The game itself is more evolutionary than revolutionary, but it is historically important because it took the click-control method popularised by Leaderboard Golf, transposed it onto a mouse, and upgraded it to the easier three-click method! Such game-changing mechanics aside, Jack’s first game is actually very run of the mill, excruciatingly slow even for golf and lacking in notable features. The sequels did improve over the years, but it wasn’t until Jack Nicklaus 5 in 1997 that the Golden Bear proved himself once again. Jack 5 is beautifully rendered, with a clean, uncluttered interface and plays a mean game of golf. The best part, however, is the inclusion of a magnificent in-built course designer. You can mess around with it for ages, recreating classic courses, your local pitch and putt, or a course mimicking the smooth curves of a fine lady – the choices are endless!

Long iron into the green… 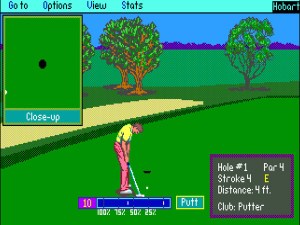 Next up onto the tee we have the original PGA Golf from EA, a game series that not only popularised the genre across a myriad of platforms, but also gave rise to the hugely successful Tiger Woods series. First appearing on the PC in 1990, PGA Tour Golf swung onto the scene and proved that Golf games could be quick, accessible and most importantly, fun. The presentation is outstanding with a club shop menu, hole fly-overs and reverse angle views. The gameplay is slick and there’s no need to wait between shots for the view to redraw – instead we get delightful venetian blind transition effect! The game still uses the tried and tested power bar control method, but it has been neatly refined, thus making the game easier to play and giving the player a greater sense of control over their virtual golfer. The only real negative is that when you drive the ball high through the air it proceeds to pass over the game’s menu bar rather than behind it (rather reminiscent of Mario in Super Mario Bros world 1-2), which breaks the sense of immersion. 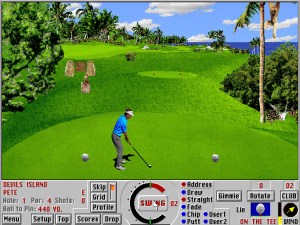 Although other games covered here have evolved into worthy series’ of their own, the Links series of games is probably the only one that deserves to be referenced in it’s entirety. Created by Access Software, Links is their spiritual successor to their original genre defining game, Leaderboard Golf. The original Links: The Challenge of Golf, released in 1990, upped the realism with digitised scenery and golfers, incredibly realistic ball physics and was the first game to feature a golf swing mimicking C-curve power bar. Links also introduced the concept of course packs; the ability to expand the game by buying additional courses, which although expensive, were produced in such a way that they could always be easily upgraded to remain compatible with later iterations. In fact, the last PC version of Links released, Links 2003: Championship edition, can still upgrade and utilise courses designed for the original game – a full thirteen years later! Every Links golf game, including the later Links LS releases, were second to none and right up to and including the 2003 game, are rightly considered the pinnacle of the genre. However, in the late nineties, the click to hit control method was feeling a little old hat and it took another game to shake things up…

Polite applause at the eighteenth… 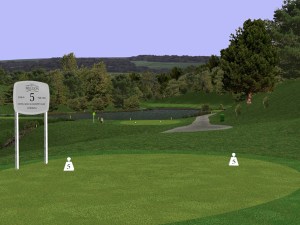 The Golf Pro, from Empire Interactive, is an interesting game. It may not be the prettiest game ever released and it certainly needs more courses, but it was the first game to perfect the then revolutionary mouse-swing control method. The game calls this swing method ‘MouseDrive’, but in reality it basically involves swooshing the mouse from side to side whilst holding down a button. At first it is incredibly difficult, but with practice becomes second nature and you’ll be playing hook shots and subtle fades in no time. Even my flatmate who is all ‘Guns, cars and violence’ started really getting into it, cursing to himself when he didn’t get the desired backspin and the ball meandered off into a green side bunker. The Golf Pro stands tall even when compared to todays Tiger Woods 14 super ultimate special edition and as such remains a shining beacon of how golf games used to be played in the glory days of the late-nineties.

Back in the Club House… 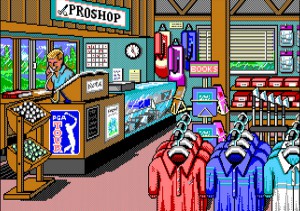 So there you have it – from golf club chopping in ’79 to a flick of the wrist in ’98, the golf game has come a long way in a few short decades. Golf games will never appeal to all gamers, however, it is also a very accessible, skilful and relaxing genre. Therefore it is somewhat perplexing that it is a genre in steep decline. At it’s peak in the mid-nineties, serious Golf simulations were being released on a weekly basis. They covered shop shelves and came bundled with every single printer, scanner or fax machine available. My own Father, who himself was a big fan, attempted a few years ago to buy a golf game, but upon entering the store was dismayed to discover that the only game available was Tiger Woods on a console. However, hope is on the horizon – Access Software co-founder, Chris Jones, having successfully used Kickstarter to fund a new Tex Murphy adventure game, has hinted that his next project might spell the return of the Links series. Father-son relationships the world over could still be saved and rainy day computer golf will hopefully soon return.

Get in the hole!

This article focuses on the more serious, simulation type of Golf games, however, many other variants do also exist. For instance, there are arcade golf games like the outrageous Neo Turf Masters with it’s crazy cast of characters and over the top reactions and Golden Tee, which is played using a trackball! Pure fun cartoony golf games, such as Mario Golf, Everybody’s Golf and Sensible Golf – some of which include light RPG elements. Mini-Golf games like Krazy Golf on the Master System and Bunghole-in-one on the PC. A First person golf game (FPG): Picture Perfect Golf, although we do not recommend it as it is probably the worst game ever made. And lastly, Ninja Golf on the Atari 7800, which is every bit as brilliant as it sounds.