T’is the Season
(to be disappointed)

Who would be a parent these days? Christmas is just around the corner and the kids have been badgering them for months to get them the latest and greatest hi-tech wizardry that Santa can fit down the chimney. But remember kids, as you unwrap the big present, the one you wanted to open first but saved until last, just to savour the moment. Remember when you tear the paper just enough to see the logo on the packaging, just before the huge wave of disappointment when you realise that it isn’t a PS4, but a fish tank and six Guppies. Remember that you are not the first. Others have walked that path of disenchantment before you and if my words can be of any help then show them to your parents and offer them the path to salvation.

My story begins back in 1984 and is tale of poverty, woe and suffering, but ultimately a tale of hope and joy (cue the wavey flashback music)…

In late ’84 there was only one thing your reporter, a young Mancunian lad with an eye for the developing technology of the day, was hoping for that Christmas. The Commodore 64 was riding high and wowing the nation with is flashy graphics and unbelievable sound. I remember the first time I heard my friend’s C64 playing a sample of Carl Douglas’ Kung Fu Fighting (which was later excruciatingly murdered by British dance band Bus Stop). I thought my ears may were deceiving me and had to check that the tape deck wasn’t still spinning. How could a computer sing to me? And more importantly how did it know my favourite song?

So after being disappointed in July when I got a bike or some other piece of useless junk for my birthday (this was the dawn of the computer age and my parents wanted me to ‘go outside and get some fresh air’), I knew I had to set my stall out early. I managed to weave the word Commodore into more sentences than the English language allows and the use of subliminal infiltration by playing Lionel Ritchie’s All Night Long all night long was a masterstroke. There was no way good old mum and dad were going to fail me this time.

Christmas Eve came around excruciatingly slowly and the presents, neatly stacked beneath the tree, taunted me with their silent ‘undress me’ cries. Nestling underneath the selection boxes and a package suspiciously shaped like an annual was the one I wanted to see. It was the right shape and size and felt just about the right weight too.  Despite the Winnie the Pooh wrapping paper, I knew that my work was done. The old duffers had come up trumps. This was to be the best Christmas ever! I went to sleep early that night using the ‘sooner to bed, sooner its morning’ philosophy that my parents had tried and failed to push on me every previous Christmas Eve.

But waking up on Christmas Day I could tell something was wrong. The sky was grey and overcast and there was something in the air, a creeping sense of foreboding that would have disheartened any normal child. But not me, nothing was going to spoil the day I had waited six months for. I rushed downstairs and with the sound of Noel Edmonds wittering on to Keith Chegwin on the telly, I ripped open the wrapping to revel in my technological glory. But as I tore the first piece of paper I could see something that I didn’t anticipate. Not the beige scene I was expecting, but a blackish grey (though admittedly better looking) impostor was lying in the box. It looked just like a Commodore 64 and I could swear that I had just seen a Commodore logo, so I kept the faith. But why did my computer have the number 91 on the box? Then I saw the site that made my heart drop. Spinning the box the right way around I realised that it wasn’t a 91, the cheapskates had only gone and bought me a Commodore 16. Even the simplest of maths told me it was 4 times less good than the machine I had coveted. My world had come crashing down on top of me.

Questions flooded my mind, where had I gone wrong? Had I been too subtle? Why, oh why hadn’t Lionel done a cover of The Beatles ‘When I’m Sixty Four’? Once I had wiped away the tears and the air in my bedroom had cleared of juvenile expletives, I finally got round to playing the games that the useless skinflints had wrapped separately to make it look like I had more presents.

BMX Racers, Galaxians and Punchy were all excellent games and I did find myself warming to my new electronic pal (though to this day I have never let my parents know it). We formed a close friendship, inseparable for the next few months, but never becoming best friends like I had hoped. I always knew that something was missing. Like the feeling that the Amstrad fans would get a year or two later, looking mournfully through the window of a Spectrum loving home, all smiles and laughter as the family take turns on 3D Deathchase, a tear slowing trickling down their face as they asked God to smite down their parents for choosing so wrongly. I too felt swathes of envy towards the lucky gits that were now playing Bruce Lee and Dropzone on their (brown and ugly on the outside, but beautiful on the inside) Commodore 64.

So what is the joy that I spoke of earlier? What was it that stopped me shipping the old fools off to a home the moment I could afford it? Quite simply put, it is because of their penny pinching indiscretion that when I was ready to leave the grey wonder behind and upgrade to something new and more exciting, they were still too tight to get me that C64. Meaning a Spectrum 48k was to be my next companion. A friend that has never left me to this day and allowed me to cast off Commodore’s evil clutches and join Maggie’s millions in their ‘Buy British’ xenophobia. 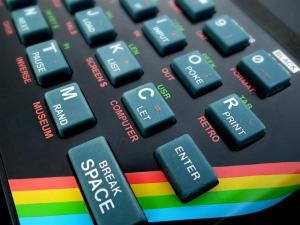 I am sure that over time you will all get to know more of my love affair with Uncle Clive’s little beauty, but for now let me just say for the first time, on record for all to see… thank you Mum, thank you Dad. Tight-arses you may be, but your hearts in the right place.

So the moral of my winter’s tale is just as relevant to today’s youth as it was those 30 years ago.

Kids – Be explicit with you parents. Don’t think that constantly saying how much you like Sony stuff will get you a PS4, there are 3 other Playstations that might end up under your tree!

Parents – Consoles are not all the same and no amount of mince pies and chocolate logs will make up for getting the wrong one . I managed to overcome the trauma of my experiences, but your child may not be so lucky. Childline will be busy this Christmas as always; don’t let it be you’re loved one stuck in the queue when they could be getting acquainted with their new best friend.

You have been warned!

← Top 10 Video:
Films for Christmas
The Games of Christmas Past →